The 2020 - 2021 Northeastern Athletics season was yet another amazing year filled with record-breaking performances and historical events.

The Huskies completed their most successful year in department history, earning a seventh-place finish in the Learfield Directors’ Cup standings for Division I-AAA (non-football) with a school record 151 points (story here). The finish is fueled by a national championship run by the women’s hockey team, and NCAA postseason appearances by baseball, men’s track and field and women’s rowing earning a 19th-place finish at the NCAA Championships.

Academically, Northeastern student-athletes had a banner year. The Huskies recorded the highest department grade point average during a full semester of competition with a 3.405 GPA in the spring and posted the highest fall GPA at 3.417. For the first time in school history, every team achieved a 3.0 cumulative GPA for the entire academic calendar (fall and spring) and now have posted a department GPA of 3.0 or higher for 27 consecutive semesters.

On June 17th, Northeastern Athletics named Jim Madigan, a hockey legend for the Huskies as a coach and player, to serve as its 11th Director of Athletics and Recreation. “I’m humbled and honored to be our next athletic director,” says Madigan. “I look at this role as a culmination of all my experiences here on the Northeastern campus.

Madigan brings more than 30 years of college and professional athletics experience to his post on Huntington Avenue. He played for the Huskies from 1981 to 1985 and was an assistant coach at the university from 1986 to 1993. He served as a professional scout for the New York Islanders and Pittsburgh Penguins from 1993 to 2011, winning a Stanley Cup in 2009.

Northeastern does athletics the right way, “We’re competitive, we want to excel in everything we do. But it’s not at the expense of making sure our student-athletes challenge themselves and are motivated academically and socially to be part of the community on campus and in the Greater Boston area.”

For information on supporting Northeastern Athletics, please contact Nicole Girard at 617-373-2523 or n.girard@northeastern.edu

Provide Support For All Student-Athletes:

The Howlin’ Huskies Fund (HHF) is Northeastern Athletics’ annual giving fund, which supports all student-athletes. Gifts to the HHF will provide unrestricted dollars to the department and will allow for strategic investment in all Northeastern Athletics programs, enhancing the university’s ability to compete for and win national championships. 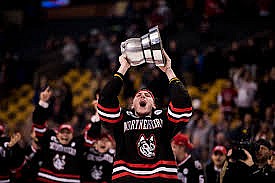 MISSION OF THE DEPARTMENT OF ATHLETICS AND RECREATION

To provide a distinctive student experience and competitive excellence which unleashes and energizes networks of engagement and pride.

1. Distinctive Student Experience - We will provide exceptional opportunities that transform the lives of students and stakeholders.

2. Culture of Excellence - We will foster a drive for excellence that permeates every aspect of our work and that is emblematic of our university.

3. Opportunities to Engage - We will create unique opportunities for engagement that inspire new and deepening connections with stakeholders both at and outside the university.

4. Platforms for Success - We will enhance operational efficiency and cultivate a sense of belonging that provides the foundation for our success and global distinction.

To support all student-athletes, click on the Howlin’ Huskies Fund box below. To support your favorite team, click here.